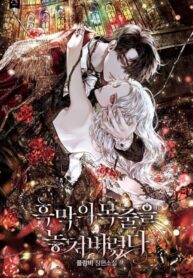 Anjeun nuju maca I Lost the Leash of the Yandere Male Lead, a éndah manhwa.

흑막의 목줄을 놓쳐버렸다 I transmigrated into a novel and became the villainess, Serina who comes from the noble Ducal Melford family. As a well-to-do character, I tried to mind my own business, but the story had other ideas. A self-proclaimed mother brought back a boy – the duke’s heir and a genius wizard – intent on brainwashing and blackening him. The contents of brainwashing are two things: 1. Obey our family. 2. And fall in love with Serina. Thanks to that, the brainwashed twisted yandere is obsessed with me… I can’t do this. I have to undo the twisted character’s brainwashing! By the way, what’s this situation? “Now that the brainwashing is gone, I’ll do as I please. So Serina, please, let’s do our best.” I’ve solved his brainwashing… but why does he seem even crazier than before— Did I make a mistake?

Asalna A Lady With One Line